I hope all the mums out there had a lovely Mother's Day.
My two-year-old gets very excited about giving presents now - they are called pre, he doesn't say the second part of the word yet!
He rushed in from the shops with my husband on Friday and happily revealed he'd bought me a 'pre'! Then told me it was some chocolates, so I was able to have them before the day.
And we made some lovely chocolates for his grandmas too and carefully decorated some boxes to put them in, so he was thrilled to give those out as well.
For mothers-to-be, who have all this loveliness to come, I've been continuing my daily exploration of baby names on the Sand-Writing.com Facebook page, https://www.facebook.com/SandWriting.
Please like the page, if you haven't already, so that you don't miss out on news and ideas.
Here are the names and www.Sand-Writing.com pictures I looked at last week and their meanings and popularity. 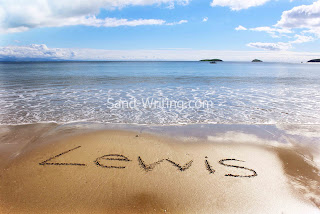 Lewis is the 27th most popular name for a baby boy
It was the English version of the French Louis in the middle ages.
The Isle of Lewis is one of the islands off the west coast of Scotland known as the Hebrides.
Interesting fact: Lewis Carroll, the author of Alice's Adventures in Wonderland was actually called Charles Dodgson. 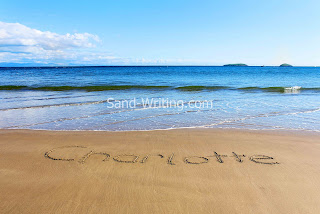 The 14th most popular name for a girl is Charlotte
It is the feminine form of the name Charles and among its meanings are free and strong woman.
It's been used in England since the 17th century. 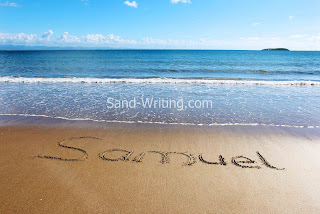 Number 16 on the most popular boys' names of 2012 is Samuel.
The biblical name can mean name of God or he has hearkened and was popular with 26th century Puritans.
It is often shortened to Sam. 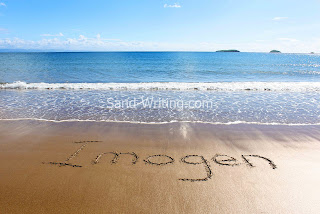 The 32nd most popular name for a girl was is thought to have originated from a mistake.
The character of Imogen was printed in Shakespeare's play Cymbeline in 1609.
But it's thought he meant to use the Gaelic name Innogen instead and the error was the result of a misreading.
Imogen means maiden. 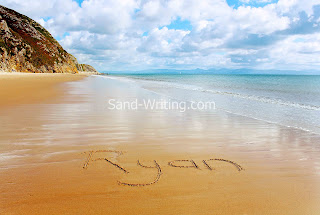 Little king is the meaning of the name Ryan.
It is the 36th most popular boys' name and is taken from an Irish surname.
In north America it is well established as a girls' name.


All of the above photographs are available to buy as canvas pictures from the website www.Sand-Writing.com from just £24.99.
There are hundreds of names and messages available - they make a gorgeous personalised present for a boy, girl or loved one.
Posted by Sand Writing at 07:58