If you've liked my Facebook page, you will have been finding out about a different name every day.
The names I have written in the sand and photographed so far were the most popular 100 boys' and girls' names of 2011 plus a few other requests and different spellings.
I'll be adding more soon, including names which made it into the top 100 for 2012 - new pictures will be appearing in the next few weeks on www.Sand-Writing.com.


One piece of advice I always thought was good when choosing a baby's name was to put a more unusual first name with a common surname. And to put a plainer first name with an unusual surname.
The names I looked at on my Facebook page (https://www.facebook.com/SandWriting) this week were: 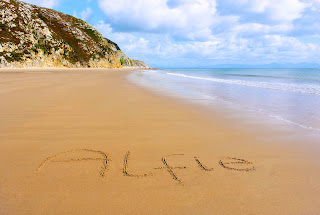 Alfie was a nickname for names beginning with Alf-, like Alfred.
But now it is a very popular name in its own right and was number 15 on the boys' baby name list for 2012.
The loveable character Alfie Moon in the BBC soap EastEnders may have contributed to this along with the remake in 2004 of the 1966 film Alfie which starred Michael Caine. 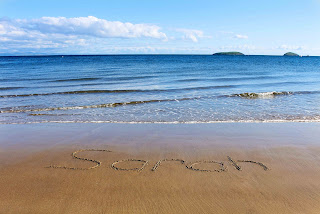 Number 90 of the girls' names of 2012 was Sarah, meaning princess.
It was a popular name when I was young and I think it is beautiful, not least because it is the name of one of my very best friends.
In the Old Testament, Sarah was the wife of Abraham and the mother of Isaac.
I hope you like this picture taken in Abersoch of Sarah written in the sand. 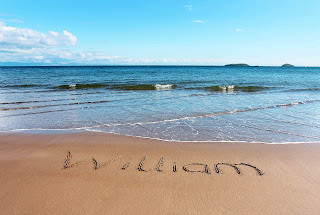 Prince William has been in the spotlight even more since his marriage and the name William is now at number 10 in the boys' name chart.
William means resolute protection and was introduced to England by William the Conqueror.
Shortened versions include Will, Bill and Billy. 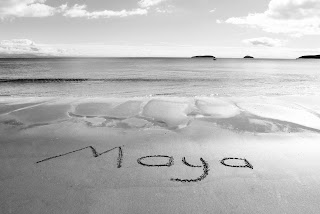 Maya  is the 41st most popular name for a baby girl.
The origin of the name is not clear.
Some say the name is of ancient Greek origin and may have meant nurse or greater.
It may also be linked to the Sanskrit for illusion.
There is also a colour version of this picture available at www.Sand-Writing.com. 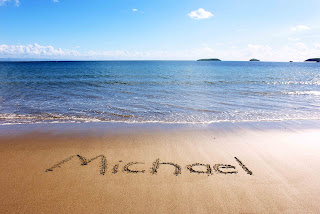 Michael has been a very popular name since the 20th century.
Today it is the 53rd most popular name for a boy.
It is based on the Hebrew for 'Who is like God?'
There are various shortened versions including Mike, Mick and Mickey.
See www.Sand-Writing.com for many more names and messages written in sand and selling as beautiful personalied presents.
Posted by Sand Writing at 06:44