The challenges of writing in sand

There has been lots of lovely interest in the website and enthusiasm for the idea and my pictures.
I'm so pleased by everyone's reaction and hope everyone who has ordered is pleased with their canvas prints.

So how did I get to this stage?

As I explained in the last entry, I'd written my son's name in the sand spontaneously  in March and the resulting canvas print looked gorgeous in his room.


Full of enthusiasm for the idea to write as many boys' and girls' names in the sand and messages, I set about finding the perfect beach.
It is surprisingly hard to find just the right type of sand for the job! I also wanted quite a pure surface and a beautiful backdrop.
And as is so often the case - I ended up back at the original beach in north Wales where the idea was born.

And so I began, armed with a stick, the lists for the top 100 boys' and girls' names and a will to write and photograph as many as possible.
After determining the best size lettering, I began, but the weather was not on my side and every time I felt on a roll, big dark clouds would fill the sky.
Many times I had  to write a name again - either the tide had gone out by the time the sky had cleared or else the sea washed it away!


It all proved quite a good workout for a newish mum who hasn't had time to visit a gym since Josh was born over two years ago.
I was delighted when - several trips later - I realised I was going to complete all the popular names and managed to add some different spellings and requests from friends and family.
I also wrote messages like Congratulations, I Love You and Just Married and some drawings like a heart.


It is quite a remote spot near Abersoch but the occasional passer-by was curious by the big names and messages covering the beach.
I wonder whether they guessed they would end up as personalised pictures in children's bedrooms and on other walls.
But I was too absorbed in my new work to explain  - and only occasionally distracted by my husband and son playing happily in the distance while they waited. 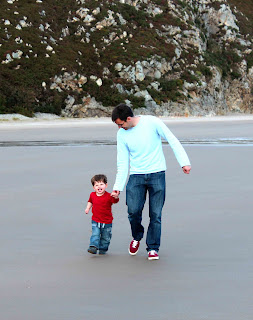 http://www.Sand-Writing.com
Posted by Sand Writing at 14:14