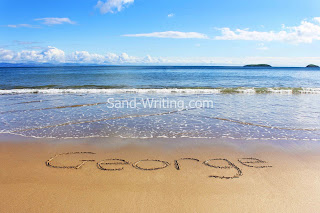 William and Kate have announced their baby's name - George Alexander Louis.
It's a lovely, solid name and was number six on the most popular baby boys' names of 2012.
No doubt it will climb even higher up the popularity charts now that the Duke and Duchess of Cambridge have chosen it for their son.
The third in line to the throne will be known as His Royal Highness Prince George of Cambridge.
George means farmer or earth worker and is of course, the name of the patron saint of England..
William and Kate had been expected to pick a traditional name and there have been six King George's up to now including the Queen's father (known to his family as Bertie).

This picture I have taken of George written in the sand is one of my favourites and is available to buy as a canvas print at www.Sand-Writing.com along with hundreds of other boys' and girls' names, all written individually and photographed on a beautiful beach in north Wales.
Posted by Sand Writing at 11:14